“Still the pacesetter for theme parks around the globe, the brainchild of entertainment giant and genius Walt Disney is an ever-expanding universe of make-believe and escapism, celebrating magic, technology, nature, and, of course, Mickey Mouse.” 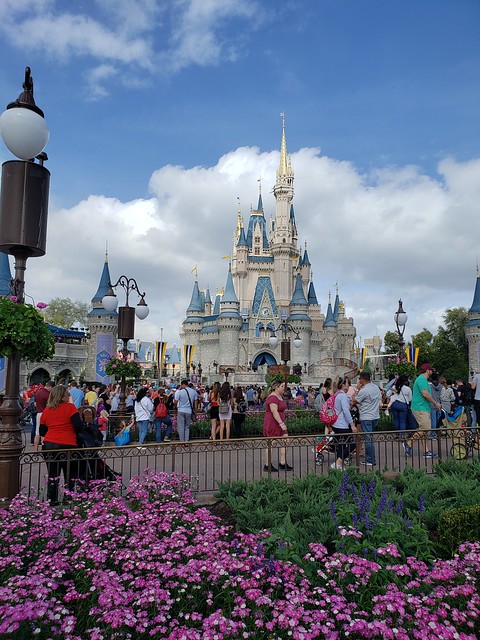 “The Magic Kingdom (opened in 1971), the lighthearted fantasy world that revolves around Cinderella’s Castle, is home to two of Disney World’s most famous (and very different) attractions: It’s a Small World and Space Mountain.” 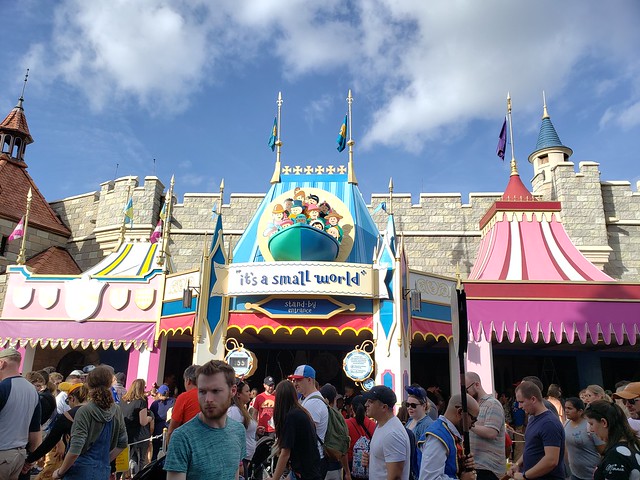 I didn’t go on either, although I’ve been on both at Disneyland.  My day was mostly spent wandering around and people-watching, which is far more entertaining than the actual park stuff, at least in my opinion.

I had my first Dole Whip (well Dole Whip float), it was really good.  I had a Mickey Burger (which had mac and cheese on it) and was better than I expected.  It was also not crazy hot, but it was very crowded.  I say this knowing that this is their least busy time of the year.  Even on a 3-day weekend, this is not a busy time, and the cast members I spoke to affirmed this.  But it was CROWDED.  It was hard to move around, hard to find places to rest, hard to find tables to eat, and no lines less than an hour. 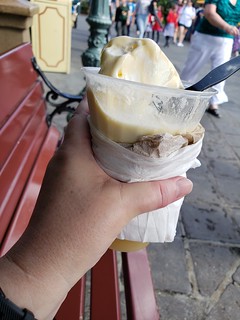 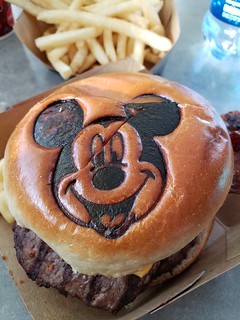 I was also struck by how much pressure everyone there was under to have THE BEST, MOST AMAZING, VACATION EVER!  I posted on FB that I couldn’t count the number of families I saw in “Best Day Ever” or “Best Birthday Ever” or other iterations of the same idea shirts with at least one child in an active meltdown.  I could count (on one hand) the number of actively joyful kids having the best day ever. 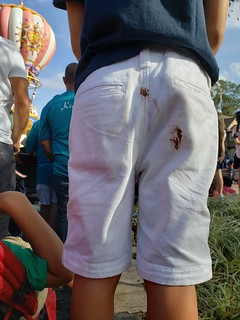 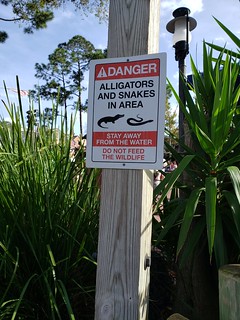 Add in how incredibly expensive it is, and man, I don’t know why people keep falling for the Disney scam.  And I’m saying that having purchased my own Mickey (well, Minnie) ears that I, honestly, have zero use for.

“Epcot (1982), the Experimental Prototype Community of Tomorrow, is an educational theme park where thrills are mostly of the mind, with attractions such as the very popular Spaceship Earth.” 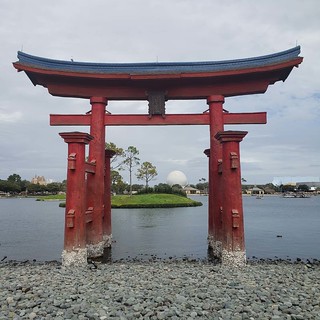 Epcot is currently under massive construction and I didn’t even bother going to the “ride” side of the park. Instead I concentrated my energy in World Showcase.

Again, it was crowded, they do not have enough seating at all, and they maybe (maybe) had a few tables outside of the eateries or snack stands, but (unlike Magic Kingdom) there weren’t a lot of low wall, or benches for people to sit on and eat.

I also thought each country pavilion was cheesy and more Disney-fied than I thought they would be.  If felt exactly like an amusement park for people who don’t actually want to know what France is like.  Oh, there were also a lot – A LOT – of drunks wandering around having taken the “Drink Around the World” challenge very seriously.

That said, I had some good food, some good drinks, and spent a ton of cash – and had a mostly enjoyable day.

“The 500-acre Disney’s Animal Kingdom (1998) is Disney World’s largest and newest theme park, with more than 1000 animals (from giraffes to lions) roaming in a natural, Serengeti-like setting.” 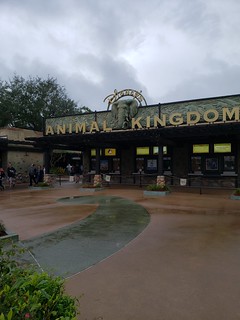 I almost didn’t go to Animal Kingdom but mentioned to my boss that I was thinking I might go after work one day this week (my ticket was good until Friday).  She said that Animal Kingdom is her favorite Disney park, so I had to go and see the Tree of Life and safari. So, I did.

The unfortunate part is that I’d moved accommodations – so I was staying north of Orlando and because it was a rainy day traffic was snarled.  Once at the park, it was still rainy – it was beginning to trail off – and everything was wet.  But because it was rainy the park wasn’t very crowded, the wait for the safari ride was probably 15 minutes – tops. I was only in the park a couple of hours, and my ultimate judgment is that it’s mostly a good zoo, but I would definitely go back and visit it again. 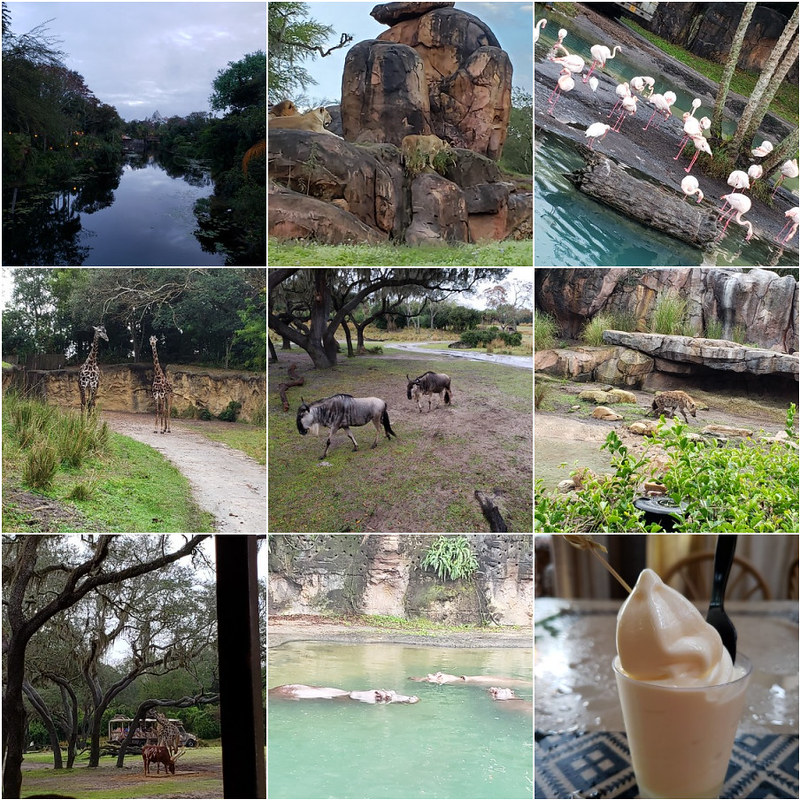 “Make the magic last by staying in one of the Disney-owned and -run hotels/resorts.  The benefits are numerous, including sheer logistics: They’re close to the principal attractions and are linked by complimentary boats, buses, or monorail.” 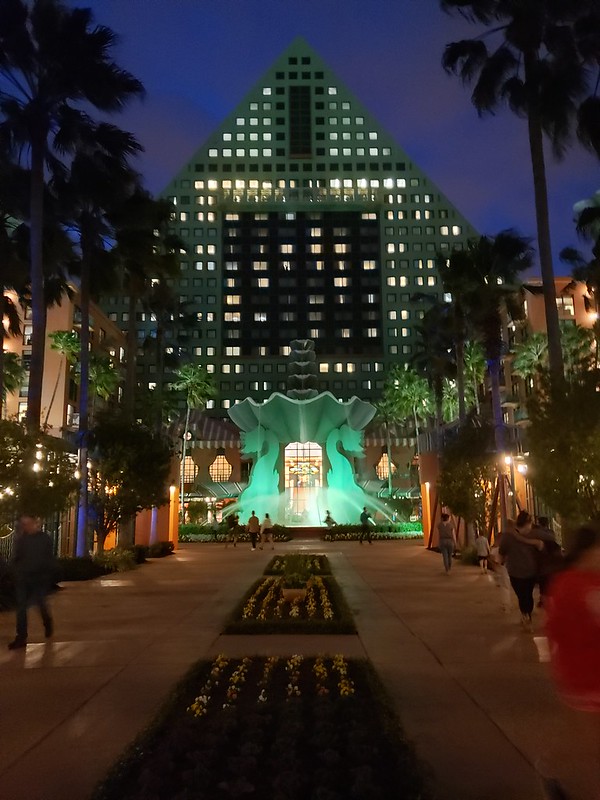 Little bit of a cheat, here.  I stayed at the Marriott property just off-site, but still have some sort of partnership and gets the same Disney Resort benefits.  The Marriott resort is 2 property (Swan and Dolphin) one is legacy Marriott and one if legacy Sheraton but became one mega property with their corporate merger. I stayed at the Dolphin on a Friends & Family Rate (thanks, Cort!) which made it (slightly) less expensive.

Staying at the Swan/Dolphin gives you access to all the amenities at both properties, extra magic hours in WDW, complimentary Disney-transportation to the WDW parks, and probably some other stuff I’m missing or didn’t care about.  It was expensive, but for the convenience you can’t beat it.
I’m gonna be super honest here.  I don’t really love theme/amusement parks.  The only reason I went to WDW is its inclusion on The List.  I did absolutely zero planning, no fast passes, no idea about what “must see” stuff was in any of the parks, just kind of winged it.  It worked out okay.

I’m mentioning here again how much pressure and how much money it is to have a Disney vacation. My total was over $1100 for 3 days.  The bulk of that was ticket/hotel at ~$900, and I did eat all my meals in the parks.  I bought Mickey ears (my only souvenir, no specialty/keepsake drinks, containers, etc.) and most of my food cost was in Epcot. And I had a good time.

But before you plan a big once-in-a-lifetime experience for your family with young kids – I’d just like to remind you that it probably won’t be the “Best Day Ever”.  It might be magical experience, but everyone will be hot, tired, and hungry – to adjust your expectations accordingly, please, and remember that everyone else in the park (the crushing crowd pressing everywhere) are also facing those same expectations and challenges.

“It it’s such a Small World how are we all gonna fit?” -Brendan, age 6