Thomas Jefferson owned more than 600 human beings during his life. He freed only 7. Two were freed during his lifetime, and five were freed in his will.  Two were his sons, and none was the woman he owned and raped and fathered children with. Three additional slaves were allowed to leave Monticello without pursuit (two of those were also his children).

One of the men freed in Jefferson's will was Joseph Fossett. His family, however, was not only not freed, but he watched his wife and ten children go up for auction and be sold to 3 separate estates. Imagine that for a second, you've received your freedom, but your entire family is separated and gone. No really, take some time to really imagine that was your family.

Jefferson believed female slaves represented to best way to increase his holdings. Why? Their fertility allowed a "self-reproducing enslaved population". That made me sick to even just type. He viewed them as capital, especially after the importation of slaves was banned in 1807.

"I consider a woman who brings a child every two years as more profitable than the best man of the farm. What she produces is an addition to the capital, while his labors disappear in mere consumption."

And, if nothing else, he wasn't afraid to father and enslave his own children after raping their mother. Hell of a guy, that Thomas Jefferson. Sally Hemings had no legal right to refuse unwanted sexual advances from her owner. Did she use Jefferson's affections to shape the lives of her and her children and protect them from the worst of slavery? Yes, she did. Did she return Jefferson's affections? Possibly, yes. Their emotional relationship was probably complicated, but we should always remember - she was smart, and she was savvy, and she was still enslaved and had no choice.

Sally Hemings was the half-sister of Martha Jefferson (Thomas' wife). Three of her four grandparents were white. Sally was 14 when she was sent to Paris and 16 when she returned to Virginia. She was pregnant was she arrived back in Virgina. She was a child, possibly as young as 14 when Jefferson first assaulted her. She was never legally emancipated.

I've struggled with the notion of Jefferson as this great thinker who wrote "All men are created equal" and also enslaved men. On this visit I think I cracked it.  Jefferson really and truly believed that all men are created equal, but blacks were not men, not really, not in his mind. He absolutely believed they were inferior, less than actually human. And additionally, he was too invested in his own personal wealth and extravagant lifestyle to give up being a slave owner.  He would never sacrifice some of his material comforts and deign to live in a cabin to pay free men any sort of wage.

Daveed Diggs said, "I think if you embrace all of his contradictions, you can end up with a lot of things about him that are great, but you still have to remember that he was a slave owner."

Also from Daveed and possibly my favorite way to think about our Founders in general, "You don't have to separate these things with Jefferson.  He can have written this incredible document and several incredible documents with things we all believe in, and he sucks." 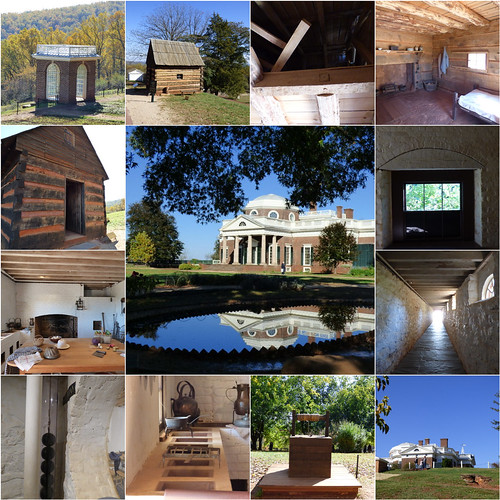