Let’s talk about Honduras, more specifically – Roatan, the largest and most popular of the three principal Bay Islands archipelago, and my #138 on The List.

The Institute for marine Sciences (RIMS) is a research and educational facility working with dolphins.  RIMS offers guests of Anthony’s Key Resort, located on its periphery, the opportunity to swim, snorkel, or dive with bottlenose dolphins.  The truly spectacular note for this is the dolphin interactions take place either in open ocean or inside the protected lagoon.  This is not SeaWorld, people.  This is you, wading into the open water to interact with these spectacular animals in their own environment.  It is absolutely mind-blowing, actually, and I did not expect that at all. 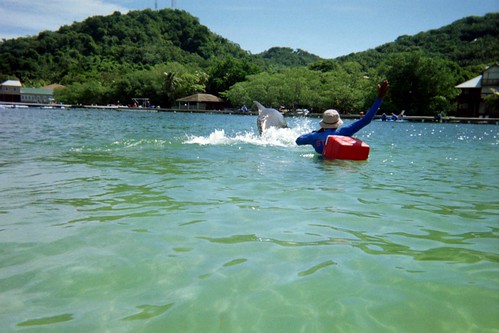 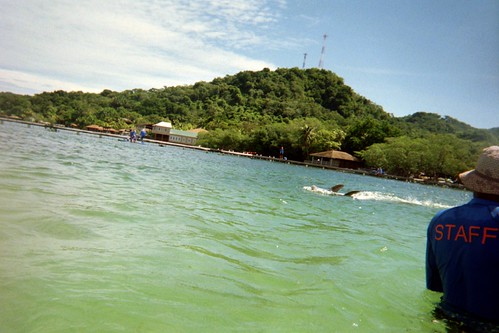 When planning this excursion, this item was on The List, and by gosh I was going to cross it off, but I wasn’t particularly excited by the opportunity.  I have watched Blackfish, and have serious concern about how humanely, or not, animals are treated in captivity, and I didn’t really want to sit on a concrete swimming pool edge, while the dolphins were forced to perform a couple of tricks and then be forced back into a tiny pen – at least until the next busload of tourists arrived.

The reality of RIMS/Anthony’s was completely beyond my imagination.  This is truly open water.  The only thing man made is the dock; otherwise you walk on a real beach, and wade into the real ocean.  The lagoon is enormous, and in the section where we met our dolphin, Gracie,  there were 4 or 5 groups of about 15 – 20 people each, and still so much open water surrounded us.  Way off in the distance there was another dock with several employees seemingly loitering about. 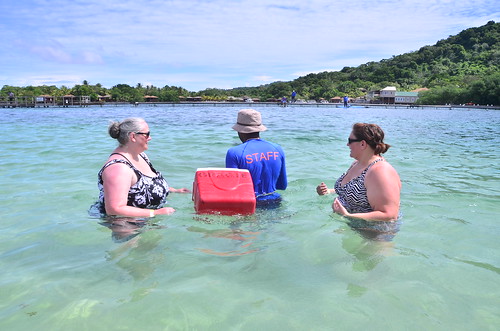 We waded out until the water was “waist-high” (chest high for us short folks), and stood side by side in a straight line with our groups.  “Dolphins don’t like to feel crowded or trapped,” our expert told us. “They won’t swim with you if you are in a semicircle or crowding them.  They hate it.” 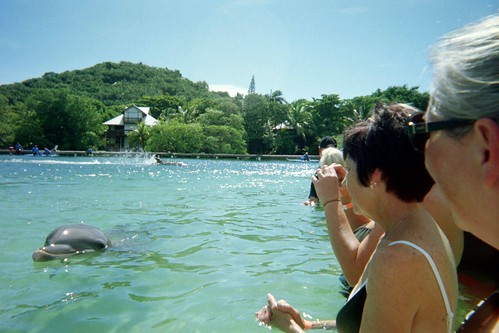 She also explained some basic rules of dolphin safety.  Amounting basically to, “don’t touch them where you don’t want to be touched.  Stay away from genitals, eyes, ears, mouth and blowhole.  Do you like strangers to poke you in the eye?  Yeah, neither do they.”  Common sense, really. 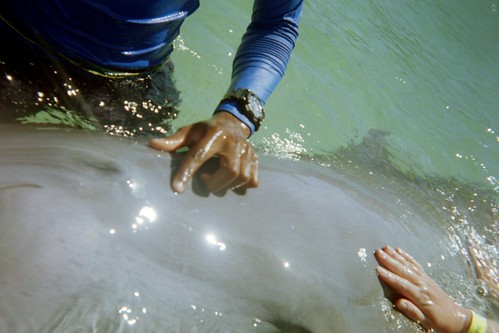 Our trainer, pointing out Gracie's ear. 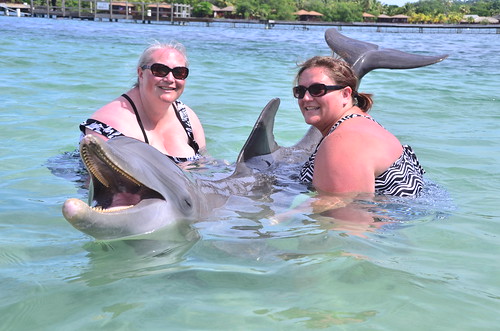 During our “encounter” I personally observed how much the dolphins love playing.  Genuinely, enthusiastically, like puppies or little kids.  They love to have you, flat handed - of course, to rub their sides and bellies.  They do this with each other, with their fins.  And when they flip on their back for a belly rub they fall into kind of a relaxed trance.  Without the trainer there to guide them along the line, they will drift away. 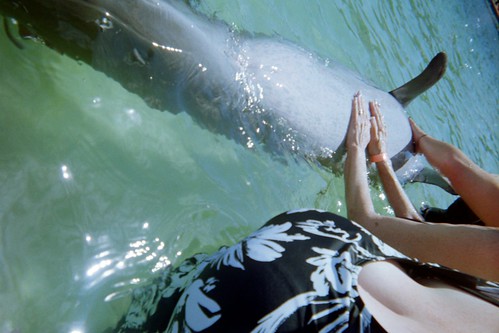 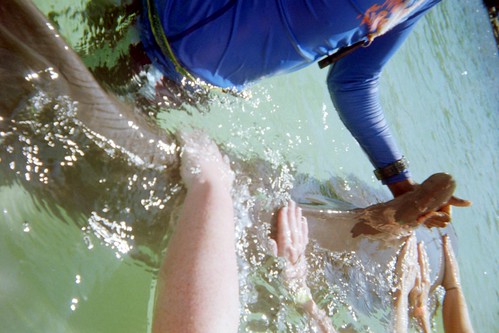 They are mischievous and love to be part of the action. There were several dolphins in the lagoon that weren’t part of the official interaction.  They were, like the employees I mentioned earlier, loitering around the lagoon, just hanging out with the guests and sneaking in a little belly rubbing where they could.  At one point, I remember feeling something bumping against my leg.  I looked down and there was a rogue dolphin trying to nudge its way between me and the woman next to me.  I swear I could almost hear it saying, “Excuse me, can I get through?  And if you happen to give me a little rub….”  Our trainer told us not to give in to the little trouble maker.  “She’s just trying to get attention; she’s supposed to be over there,” he said pointed at the far end of the lagoon with the lollygagging trainers.

They are social animals and thrive in groups.  Trainers become part of their family.  Gracie was a grandma, with children and grandchildren in our lagoon.  Without their family – including the human members – they are despondent; they miss them. 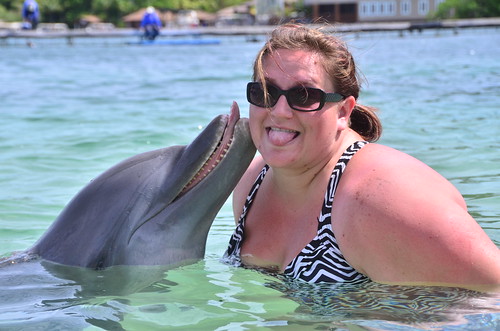 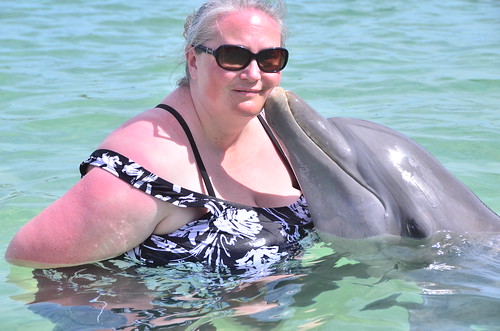 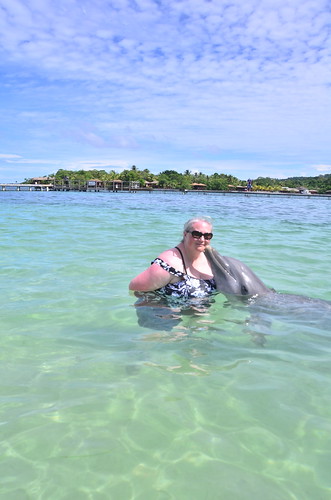 I look at those photos and wish my face showed just how much fun I had, what a great adventure it was.  Here I was, with a cazy-terrible sunburn, a giant hole in my foot, in so much pain I could barely stand (or walk – I literally had to use a cane to get around that day), in (probably) mild shock and still this is definitely in the top 5 best days of my life.  Top 5. 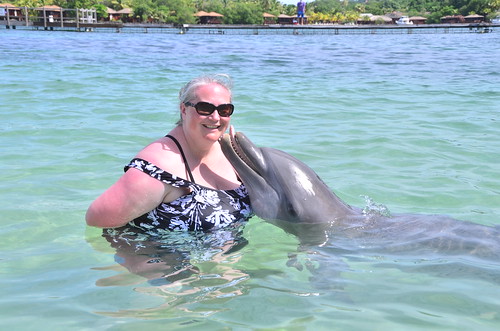 Also, it was so beautiful there.

Go, go to Roatan, go to RIMS, go to Anthony’s Key Resort, go as fast as you can because you absolutely will not regret it.  Go. Now. Go.
Posted by jalaire at 9:39 AM